Flatcreek Road is the first album that The Wentzel Brothers Band has ever written en recorded! The album was released on May 25, 2017 and was influenced by many different styles of country songs that rock. Being and forming a band together is one thing. Playing and recording a full album another....

Flatcreek Road was recorded in december of the year 2016 at Blackbird Studios in Berry Hill, Tennessee in a single twelve-hour session. This album was recorded with a live band (a style of recording in which all parts of a song are recorded at once. The Nashville album Flatcreek Road was mixed by Tim “Mr. Starchy” Goode, who is is a good friend of The Wentzel Brothers Band, and mastered by Sage Audio.

The band created this Nashville album as a four-piece band. Issac Wentzel played the lead guitar and sang the lead in every song except No Better Place, Ivan Wentzel played the drums in every song and sang all the backup vocals(also sang the lead vocals in No Better Place), Jacob Newcomb played the bass guitar for the tracks, and Joshy Terry recorded the rhythm guitar throughout Flatcreek Road. The lyrics are mainly written by Ivan Wentzel, with a few exceptions being “Can't Wait” and “What Was I Thinking”. Issac Wentzel wrote the melodies for the vocals in the country songs that rock.

This Nashville album was written and recorded within six months of the band forming. Flatcreek Road was part of an experimental writing phase for The Wentzel Brothers Band. As each member learned more about their strengths and weaknesses, they were able to find their roles in the creative process.

The album is named after a local creek( Flat Creek) near where the Wentzel Brothers were raised. The album art features The Wentzel Brothers Band sitting in the back of Issac Wentzel’s 1972 Chevrolet C10 pickup truck. The back cover is a photo of a street sign to Flat Creek Road. The album's photography was all photographed and edited by Jennifer Hedgepath of Northern Belle Photography. The package design is by Tom Comet.

The Wentzel Brothers Band was a very new band and the members were very young during the making of Flatcreek Road. They wanted to start bringing back rock and roll after hearing what people call rock nowadays. Ivan and Jacob were 18 and had just graduated from Forrest High School located in Chapel Hill, TN. Joshua was had just turned 17 at time of the recording and was a junior in high school. Issac was only 15, making him the youngest out of the group. Issac was a sophomore in high school. All four member of the band went to Forrest High School, which makes them a high school band. All the band members lived in Chapel Hill, Tennesee, also.

Flatcreek Road is The Wentzel Brothers Band's first studio album and was a great way to introduce them to the world. If you're interested in catchy tunes with genuine rock and roll feel, look no further than Flatcreek Road. 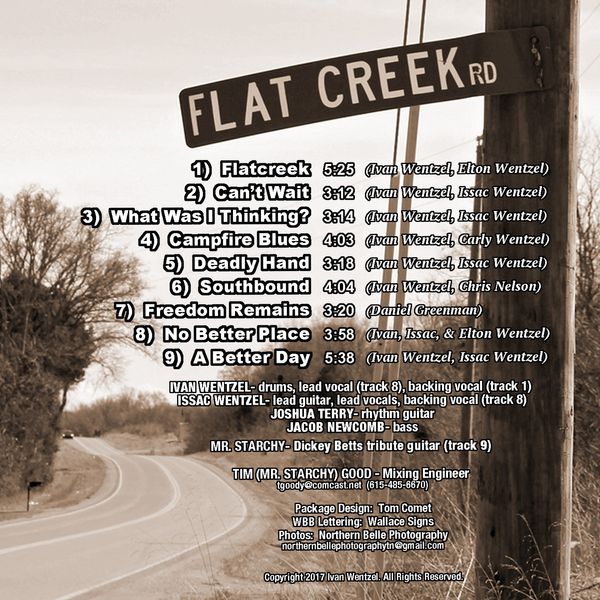