In the Shadow of The Mountain: “69 Chevelle” 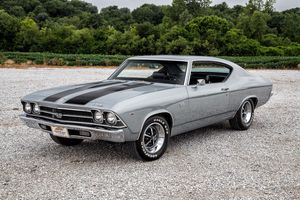 “69 Chevelle” is a song that is on the album In The Shadow of The Mountain, which was created by The Wentzel Brothers Band, and it talks about having the car of your dreams. Every member of the band thought that it was one of the coolest cars they could think of. The band knew they it could be some of the best music in Nashville. So the jam began.

Been bone dry sense I picked up my new Chevelle

Boss man's chomping at the bit just to chew me out

So everyday I end up punching out right around five

‘cause I'm dead broke, got nobody else to blame

This song is a result of a jam session. It went on for a while before Ivan called a stop to the session and grabbed a piece of paper. About 15 minutes passed and the lyrics were complete. Naturally the band went to work on arranging the song. Keeping in mind their musical influences like ZZ Top, AC/DC, and Black Sabbath, and the best music in Nashville, Issac Wentzel added killer lead guitar work. Jacob Newcomb preceded to lay down a groovy bass line. Ivan Wentzel added some driving drums and the song began to come to life.

The lyrics of the song focus on a man that spends all his money on his car. He's got the coolest ride in town but lives paycheck to paycheck and struggles to afford basic necessities.  He's more interested in building his persona as a cool stud opposed to settling down and going with the flow.

This song was recorded at Sound Revival Records during the Shadow of the Mountain session. It was one of 10 other great songs tracked that day. It has become some of the best music in Nashville. This is some of the best live concert music! It rightfully earns its spot as 1st on the album.

In conclusion, “69 Chevelle” is an epic southern rock tune with an infectious driving rhythm and wailing lead guitar. Definitely some of the best concert music there is. This song is something any rock fan south of the Mason-Dixon line can get behind, or anyone into muscle cars.